Last month, pointing out that “almonds don’t lactate,” FDA Commissioner Scott Gottlieb announced that the FDA will soon issue a new guidance on the use of the term “milk.” Currently milk is defined as “the lacteal secretion, practically free from colostrum, obtained by the complete milking of one or more healthy cows” or goats.121 CFR 131.11o defines milk as only coming from cows. That definition is reiterated in 21 CFR 58.101(k)(1)  and the next paragraph, 21 CFR 58.101(k)(2) ads essentionally the same definition for the lacteal secretion from goats.

Let’s put that all together. Since “milk” (according to the FDA) is from lactating cows or goats, and almonds don’t lactate, what is normally called “almond milk” is actually an “almond beverage.” Apparently the FDA is going to crack down on making sure the all those fake “milk” products are properly identified (for anyone who actually thought that almonds lactated).

It’s likely this is the result of a push from the dairy industry. In fact, legislation was introduced in 2017 to specifically limit the use of the term “milk” to just cow milk (or maybe mammal milk). It didn’t get much traction, but the dairy industry will no doubt lobby for some legislation to get pushed through at some point. 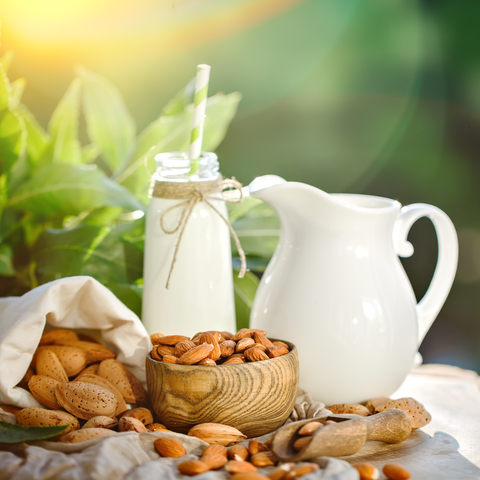 So what does that have to do with soap and cosmetic labeling?

It has to do with what you say on the label and how ingredients are identified in the ingredient declaration.

If you refer to “almond milk” or “coconut milk” on the label, you might want to consider changing that out and removing the “milk” reference.  It’s not much of an issue now, but it could become one if the FDA does start cracking down on the use of the term “milk.”

In the Ingredient Declaration

According to the regulations, the name used to identify ingredients should be the name used in the International Cosmetic Ingredient Dictionary (except that botanical names should use the English version of the plant name, not the Latin name) 2This is true in the United States only. Other countries would use the Latin name only..

The correct names are based on what the product is – a fruit or seed water.  So you have:

If you want to include the Latin name, it would go in parenthesis after the common English name, for example:

It’s unlikely that the FDA (or your local state) would come after you for incorrectly identifying your ingredient as “almond milk” in your ingredient declaration. That might change if the FDA decides the use of the term “milk” is of higher priority (or if legistration is passed which required more rigid enforcement).

So if you use a nut “milk” in your cosmetic product or soap, next time you print your labels, update your packaging to correctly describe your products and list your ingredients.

Previous: Are Your Color Additives Legal?
Next: Making Cosmetics in Connecticut

9 responses to “An Almond Doesn’t Lactate”