Are Your Product Claims Fake News? 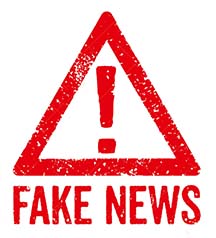 You may have heard that Google, Facebook and other social media sites are trying to figure ways to weed out fake news before it makes its way into the wild. That they are using a combination of artificial intelligence, computer algorithms and live human reviews to decide what’s real and what’s fake. That they have started banning the sites and groups they’ve determined are creating or passing on fake news.

On the one hand, that could – maybe – be a good idea.  Censorship and other issues aside, eliminating truly fake news might make it easier.  But ….

Where do you (or they) draw the line?  What constitutes “fake news”? How far does it need to be out of the mainstream or in the realm of “unproven fact” before it’s fake? What constitutes valid “proof”?

And what in the world does fake news have to do with labeling and handcrafted soap and cosmetics?

The problem is, that it’s very, very easy to make a handcrafted product that’s applied to the human body to slide down that slippery slope from cleansing and beautifying into the realm of treating or preventing physical issues. In other words, into the world of unapproved new drugs.  Going from a massage oil to a sore muscle treatment.  Sliding from a cleansing lotion to an acne cream. Jumping from moisturizing to eczema relief.

And fake news has something to do with that.

It’s not all politics and martian babies

Used to be that fake news was associated with politics and outrageous claims about martian babies, Area 51 and the Loch Ness monster.  Nowadays, though, the definition of fake news has shifted from “outright lies” to  “statements that can’t be proven.”

An “unapproved new drug” is one that hasn’t been PROVEN (through rigorous scientific research and approved by the FDA) to do whatever it is supposed to do.  When someone claims (or even implies) that XYZ product will treat eczema, not only does it become an unapproved new drug from a legal/FDA point of view, it is an unproven statement about the product. There may be customer testimonials or anecdotal evidence about the product or even some studies behind the ingredients, but that doesn’t – in a purely scientific world – constitute proof.  In other words, it’s a statement that can’t be proven. Fake news.

In the midst of all the recent hulabaloo over fake news,  Facebook banned over 50 pages, geared toward organic, natural, or alternative living.1A list of the websites can be found here. Some of those pages had over a million followers. While Facebook apparently hasn’t made all their reasoning known, it seems – at least from what I’ve read – that the common denominator is that those sites were promoting views outside the accepted and proven medical norm. Needless to say, there are more than a few people up in arms about it.

What about your products?

If you make handcrafted soap and/or cosmetics, and promote or sell on social media sites or have your site indexed by Google, you might want to do a double-check on what you are saying about your product(s).

Make sure you are staying within the legal realm of soap and cosmetics, and that your products haven’t migrated over into the murky waters of unapproved new drugs–and fake news.

6 responses to “Are Your Product Claims Fake News?”