You’ve developed the perfect product and you want to keep the formulation secret. Can you hide some of the ingredients? Well, yes and no.

Any formula, pattern, device or compilation of information which is used in one’s business and which gives him an opportunity to obtain an advantage of competitors who do not know or use it.

The law and the FDA regulations have a provision for registering a trade secret, which — if approved — lets you omit the ingredients in the trade secret from the ingredient declaration. In that case you can just say “and other ingredients” at the end.

There’s a form, available online or from a local FDA office.  Fill in the form and send it in.

There’s the rub.  It’s not just sending in the form  — it has to be approved by the FDA.

According to the FDA website, they have only approved one (ONE!) trade secret application in the last twenty (20!) years.

So even if you fill in the form and send it in, that approval is not likely to be winging its way to you any time soon.

How to keep your secrets anyway

Called “security by obsurity” in the internet security world, there are some things you can do that will at least camoflage or obsure your secret information. Try some or all of these little tricks:

The Coca-Cola company has one of the most secret formulas ever. Even though they have production facilities all over the world, sell billions of dollars of coke every year, and have been in business for over a century, only a few people actually know (or have ever even seen) the formula. It’s kept in a vault in Atlanta. 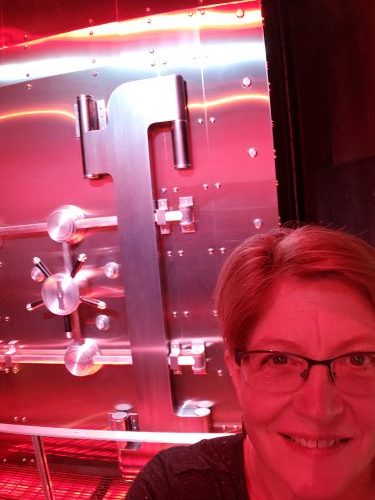 Visiting the Vault at the Coke Museum, Atlanta, Georgia

The formula has never been patented, so it’s not even partially disclosed on a patent form. Coke never applied for a “trade secret” exemption for the ingredient, so the secret was never disclosed to the FDA.  On the ingredient declaration they say only”natural flavorings” (which, like fragrance, don’t have to be disclosed).

And in over 100 years, no one has yet been able to duplicate it.

Has this site been helpful?