This is part of the Labeling Basics series in which I am taking labeling back to its most fundamental parts, starting with the legal terms used and then going on from there.

The words and terminology specific to a particular subject or area of study.

Related to plants; a part of a plant.

“INCI” stands for the International Nomenclature of Cosmetic Ingredients.

Each listing includes specific information which can be used to understand and identify that particular unique ingredient. The details include: 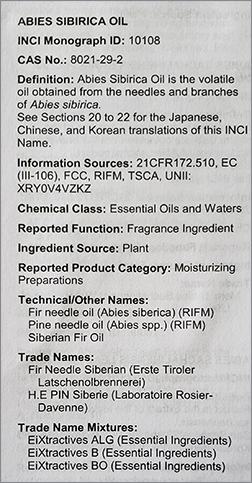 Sample listing from the ICID

When you say “This is the INCI name for ____” it means that it is the accepted and standardized name for that particular cosmetic ingredient, as it is listed in the International Cosmetic Ingredient Dictionary. There may be OTHER names for the ingredient, but the INCI name is the standardized and accepted name — the “common name” or at least the “commonly and internationally accepted name.”

Example: “Sodium bicarbonate” is the INCI name for “baking soda” or “bicarbonate of soda” or “carbonic acid, monosodium salt” (all of which are different names for the same thing).

Example: “Lye” is a general term and could refer to several very different chemical substances. The correct INCI name for “lye” is either “sodium hydroxide” OR “potassium hydroxide” depending on its chemical make-up.

Botanical ingredients also have different ways of being identified.  There are Latin scientific names based on the Linne classification system which are used identify a specific plant. There are also the common names for plants, which can vary based on the country and language.

The first editions of the Cosmetic Ingredient Dictionary were for the US, and the plant-based ingredients were listed by their common English name (i.e. Fir Needle Oil).  In later editions (starting in 1995), the internationally recognized Linne classification system was used to identify plants2The INCI name is USUALLY the same as the name in the Linne classification system, but not always. Where names or classifications have changed over time (and they do!) the INCI name may not be the same as the name currently accepted in the botanical scientific community. in order to eliminate naming confusion across multiple languages (i.e. Abies Siberica Oil).

Internationally, the listings in the ICID are used as-is, including the Latin Linne-classification name for botanical ingredients.

In the United States, the Fair Packaging and Labeling Act requires ingredients be listed by the “common or usual name of each ingredient.”3 15 USC 1454 (c)(3)(B) The regulations specifically reference the 2nd edition (1977)4 21 CFR 703(c)(2)(i), but later publications by the FDA indicate that more recent editions of the ICID should be referenced to identify the correct name to be used for cosmetic ingredients.5Current Issues in the Safety and Labeling of Cosmetics; Linda Katz, Office of Cosmetics and Colors (video), Oct 20, 2011. https://www.youtube.com/watch?v=akPq1tsbze0.

We cannot accept the current … proposal that the genus/species names, using the Linne system in the primary position with the English plant name in parenthesis, be allowed for the purpose of declaring botanical ingredients on the labels of products intended for distribution and sale in the United States.

The INCI name for plant-based ingredients may be stated in parentheses:
Lavender (Lavendula Angustfolia) Oil or Coconut (Cocos Nucifera) Oil

The 6th edition of the Cosmetic Ingredient Dictionary came out in 1995 – that’s over 25 years ago. Since that time the FDA hasn’t updated their regulations on the subject, but the United States and global cosmetic industry has gradually adopted the international Latin Linne naming system for botanical ingredients.  Most of the products you see on retail shelves use the INCI (Latin) name first and sometimes, but not always, include the common English name.

In fact, even back in 1995, in the letters the FDA sent responding to requests to update the regulations they cited several food-related cases where parenthetical names were initially allowed and then after 5 years or so those parenthetical names became the allowed names. According to the letters, it was based on “consumer familiarity” with the new names.

So, while nothing has been officially stated and the regulations haven’t changed,  it looks like the FDA is, in fact, accepting the INCI naming for botanical ingredients. Consumers are now familiar with Latin names, and even expect them. Given that the FDA has been participating in International Cooperation on Cosmetics Regulation, it wouldn’t be surprising to see some sort of official clarification by the FDA on the use of INCI names for botanical ingredients at some point in the future.

The INCI name of an ingredient is not the “trade name” or the “brand name” of the ingredient. Just because you refer to your lye as “Red Devil” (and maybe it IS a red devil), that’s not the correct name for the ingredient declaration. In that case the common name would be the correct chemical name, “sodium hydroxide.”

In some cases, the trade name is registered to be included in the ICID (for a fee) and can be looked up in the ICID cross-reference to find what the INCI name is for that ingredient. (See image below for examples.)

Some ingredients are actually blends of several components. Preservatives are a good example of this. If the product is a blended ingredient, the supplier should be able to tell you the common (“INCI”) names for the individual components.

When the product, such as Germall Plus, is registered and listed in the ICID cross-reference it will show as (for Gemall Plus), “Propylene Glycol (and) Diazolidinyl Urea (and) Iodopropynyl Butylcarbamate.”

Sometimes suppliers will say, for example, “The INCI name is: Propylene Glycol (and) Diazolidinyl Urea (and) Iodopropynyl Butylcarbamate.”  However, that’s isn’t actually the INCI Name for the product… it is the listing of the component ingredients by their INCI Names. Each one must be listed individually in the ingredient declaration. Using “(and)” is not allowed in cosmetic ingredient declarations. 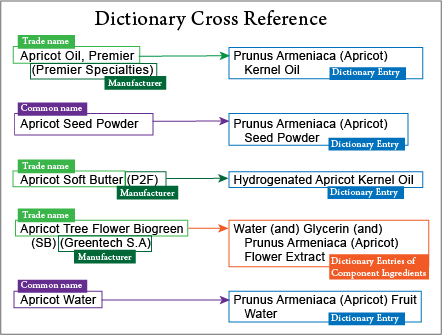 How the cross-reference section of the ICID works.

Names Established by Other Entities

Where ingredient names and specifications were established previously by other entities, those are normally included in the ICID. Other entities include the U.S. Pharmacopaeia (USP), National Formulary (NF), Food Chemicals Codes (FCC), United States Adopted Names (USAN) and others.

When an ingredient is an infusion, tea, tincture or other combination of a botanical ingredient and a liquid (solvent), the material thus extracted from the plant is called an “extract”. It is listed in the ingredient declaration along with the liquid in the same manner as a blended ingredient; the liquid and the extract are listed separately, in descending order of predominance in the whole.

As a general rule, the amount of actually extracted botanical material in an infusion, tea or tincture after straining is relatively small and very difficult to measure. The good news is that it is likely to be less than 1% of the whole, so may be listed with other ingredients present at 1% or less in any order, following the ingredients present at more than 1%.

The INCI name for fresh water is simply “water” regardless of the source (spring water, river water, glacier water) or purity (distilled, purified, sterile). It is listed as “water”.

Water that is the result of the distillation process of plants is listed by the name of the plant and “water” (i.e. Lavender water).

Salt, generally, is listed as “sodium chloride” and is defined as a synthetic product.

“Sea salt” is the correct name for salt that is derived from sea water or inland bodies of salt water. Salt from the Dead Sea would be identified as “sea salt.” Pink salt is also another name for sea salt (so it would also be listed as “sea salt” in the ingredient declaration).

Where Do You Find The INCI Name?

The complete ICID with all the details is not available for free on-line. There is a subscription service, $525 per year for members of the Personal Care Product Council; $1,250 annual subscription fee for non-members. The published 5-volume set is $1,250 for non-members.

If you don’t need all 25,000 ingredients and the other information contained in the books or online subscription, your should be able to get the correct INCI name for your ingredients from your supplier.

If you are using ingredients you purchase retail or can’t otherwise locate the correct name, there are several INCI look-ups online which contain the most common ingredients.  One good place to to start is at the Handcrafted Soap & Cosmetic Guild’s Ingredient Lookup. Note that you have to be a registered user (free) in order to access the Ingredient Lookup.

Finally, you can check the Wikipedia or do a Google search for the ingredient name.

Why is it Important?

Correctly identifying the ingredients in your products is required by law and by regulations.

It is also a service to your customers to give them enough data to make an informed decision about the value of your product and whether they want to purchase it.

Using the established names for ingredients provides transparency and truthfullness, making the data understandable. It also makes it possible to compare different products because the same names are used to identify the ingredients.

All in all, using the correct names to identify the ingredients in your products presents you as professional in your field.

Support this site & pay it forward

Helping the handcrafted soap and cosmetic industry has been my passion for nearly 20 years now. With this blog and answering questions sent to me, I try to provide accurate information freely and to assist those making soap and cosmetics to follow the rules and regulations. While others may charge for answering questions or create paywalls to access the data, I will always try to provide the important and necessary information freely to all.

If you feel this information has been valuable to you, helped you, and would help others -- and if you can afford it -- a small payment to help offset the time, effort and cost of providing this information would be greatly appreciated!